During the seven weeks of 'Daily Fiber Intake' we'll focus on individual artists here on our blog. Every week, several artists will be featured. Today, we're pleased to introduce to you: Elizabeth Germann. 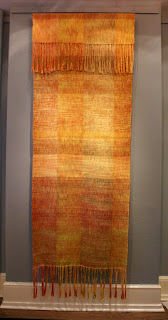 "Sunrays"
Elizabeth Germann graduated from Kutztown University with a degree in Fine Art: Crafts and a degree in Art Education in May 2010.  She chose textiles as a concentration within her crafts degree.   While studying at KU she took studio level weaving and structural fiber courses with Barbara Schulman and Rachel Chambers. With these courses focusing on weaving, dying, and felt making Elizabeth quickly became very passionate for textiles.
The processes involved in creating her artwork are extensive, but it is the dying process where she feels most expressive.  Color is a very important aspect in her artwork.  Elizabeth enjoys painting the dyes on her warp threads and woven fabric to blend color transitions and allow for a more fluid appearance.
She is currently teaching art in Harrisburg, PA at an after school program for inner-city students in grades kindergarten up to high school called The Center for Champions.  When she is not teaching her time is spent weaving and dying at her home near Hershey, PA.
www.luckywalnut.com 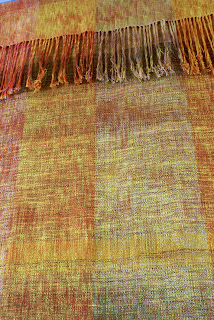 Posted by some things looming at 8:00 AM