"Shoot! I forgot to pack the baby's bib!"
"No problem! Here, I have this plastic grocery bag,. Ummmmm, let's cut the handles and, look. See? The handles become ties, and ta-da! insta-bib"
"Could you make a zipline out of two paperclips and a shoe string?"
"Um, that might be stretching my talents a little bit."

I have a bit of a reputation in my family for adapting, adjusting, innovating, and creating something from nothing (including, but not limited to, emotional drama). Perhaps this isn't surprising considering I'm an artist.  However, I'm not talking about making art, perse. I'm talking about my MacGyver side: my ability to make-do with whatever I have on hand at the moment to get out of a crisis, or in this case, make working at my loom "more better," to borrow my child's phrase.

I don't know about most folks, but I need some kind of noise while I work. Whether it's music or a movie, I am more productive when I can fill a void of silence.  Normally, when I'm at my loom, I either listen to Pandora on my iPod, or I stick my laptop on a rolling computer cart and turn on Netflix watch instantly, and listen to a T.V. show I've seen a million times, or a movie that's familiar to me.  (I need to look at the screen less often, that way).  However, I've never been too thrilled at the way the desk can sometimes hinder my ability to get up and down from my loom bench, nor, how I had to be tethered by ear phones to the laptop.  Oh sure, I have additional speakers that can amplify the lap-tops puny ones, but that adds another problem of where to place the speakers so clumsy, klutzy me doesn't step on them, or knock them off the cart.  The cart has just enough space for the laptop and barely room to use my mouse.  I was forever dropping the speakers, so I started using the headphones.  Added bonus of the earphones? I can better shut out the world while I work.

"Necessity is the mother of invention," I believe I've heard it said.  The other night, I was working late in the loom room fighting against an impending deadline.  I went to set up the laptop, only to realize, I had left it at home, much to my dismay.  So I pulled out the iPod touch, and started to set up Pandora, when the lightbulb in my mind went off. IDEA!  I'd bet there's a netflix app for this puppy.


I pulled up the app store, found that Netflix did, indeed, "have an app for that", downloaded it, and cued up the first TV show I wanted to listen to.  But, wait, not good enough. Sometimes I like looking up and just watching for a minute or two, even if I have already seen this show.  I don't really want to look down at my loom bench.  Hmmm.   So I pondered the problem for a minute or two, and then had a revelation.  My iPod is the size of an index card.  I'm forever attaching index cards to the castle of my loom to keep track of the pattern I'm weaving...hmm, yessss.... I bet this would fit on the castle, and hey, the cord to the headphones would reach better. Oh, yeah. This could work!

But I quickly discovered I had a problem: how to attach it to the castle.  I didn't want to use tape. That would ruin both the iPod and the wood of the loom.  I thought of a small bungee cord, but, no, that would have taken too much time to hunt one of those up. Who knows where I put those when I moved my studio to 526 Washington Street two years ago.   I looked around the loom room.  Well, duh. I'm sitting here surrounded by yarn. I'll just tie the iPod to the loom.

As I sat and contemplated the best way to tie the iPod to the castle of the loom, and what color yarn I wanted to use, I remembered these bright yellow shoestrings we've had in the family since 1984.  But that's another story involving a summer camp, name tags, a need for some kind of string to hang the name tags around our necks, and Floyd's purchase of five pounds of bargain banana yellow shoelaces that multiply in the dark. Which explains why we still have at least a pound of shoestrings left twenty-seven years later. I'll skip over the details, but needless to say, we've found a multitude of uses over the years for these things. Shoe strings keep their bow in place, for the most part, right? They're designed for tying right? That should work, I rationalized.

I keep debating about switching out the laces for some velcro tie-wraps.  But then again, there's just something cheerful about that yellow.  And the memories.  They take me back to another time and another place and another story.  I doubt I'll be replacing them any time soon.
Posted by some things looming at 6:30 AM No comments:

Email ThisBlogThis!Share to TwitterShare to FacebookShare to Pinterest
Labels: how to

Providing a venue to showcase the next generation of fiber artists, ‘some things looming’ invites you to enjoy the innovative work of Kutztown University fiber art students and recent alumni. 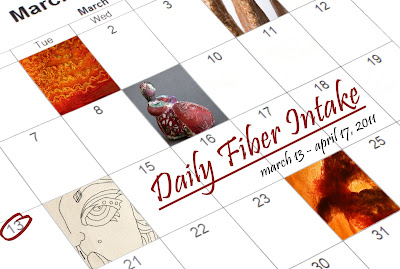 Our curator, Barbara Schulman, as the head of the Fiber Department at Kutztown University, has had the  pleasure of working with hundreds of gifted students over the last eighteen years. As contemporary artists,  students dye, stitch, weave, felt, knot, net, manipulate materials and invent new techniques with enthusiasm,  energy, and ideas that never stop.
join us for the opening reception:
sunday, march 13th from 1-3pm.

rennaisance music provided by angelica consort.
(http://www.angelicaconsort.org)
Posted by some things looming at 11:25 AM No comments:

'some things looming' will be closed for bereavement, February 12, 2011.
I hope you'll forgive me my indulgence as I include an excerpt of an article about Ralph. I guess it makes me feel good to share him with you. The "battery-operated old man" referred to his pacemaker and was his standard response to, 'How are you today Ralph?" Reply?, "Not bad for a battery-operated old man."

Ralph Wittle married my mother, about 34 years or so ago. He survived my mother by seven years. Even though he was a 'step' parent to us, we spent a lot of years together as family, and wanted to share a little bit about him. I found this brief article about him in relation to his volunteer time at the Chris Sanderson museum. It gives us a glimpse into a very nice and very interesting man.

Among many,many other things, Ralph was an artist and pretty decent writer. He knew a lot about art history and a trip to any kind of museum with him was always very enlightening. He was very well read, very political and often not politically correct. He loved God and he loved and served his country.


Excerpted from, Ralph Wittle in the Volunteer Spotlight By Chip Lohmann:

Ralph Wittle, the Sanderson Museum's self-proclaimed "battery-operated old man" was born on August 30, 1922 in Florin, PA (which is now part of Mount Joy). He was anything but a lonely child as he was the youngest of 15 kids.

Ralph was inducted into the Army in September 1942 and did his basic training in Texas. Married a year later, he was sent overseas as part of the Third Battalion, 407th Regiment of the 102nd Infantry Division. Ralph landed in Cherbourg, France and was soon sent to the front as part of a forward party.

In October 1944, Ralph's unit was assigned to the area along the Netherlands/Germany border. Eventually, they participated in the Rhineland and Central Europe campaigns. He proved to be a model soldier, earning the Bronze Star, Good Conduct Medal, American Service Medal, EAME Service Medal with two bronze stars, Victory Medal, Occupation Medal, and the Combat Infantry Badge. His division took more prisoners than any other unit in the war.

During his final tour of duty, Ralph served as battalion Sergeant Major. His unit was positioned on the Elbe River when the war ended in May 1945. Ralph was later transferred to the 15th Tank Battalion which was stationed in Rothenburg, the oldest walled city in Germany. After earning enough points to be discharged, Ralph was released from the Army in February 1946.

He eventually began work at Sears in May 1958, repairing timepieces right up to his retirement in June 1986.

For the complete article: click here.
Posted by some things looming at 5:13 PM No comments: