Floyd took out his phone to pull up the internet. I wondered if my GPS would help. About that moment, I realized I saw 'Free WiFi' posted on the door of McDonalds. I also recalled, that in a flash of brilliant foresight, that I had brought my laptop along with me.

"Hey, Mc D's has WiFi. I bet I could pull up the 'net on my laptop, we can get to Google Maps, and see if there's an alternate route. At the very least, we can see if we need an alternate route. Maybe if you get close enough to the building, I can get a signal." I said.

Floyd crept the van closer and closer to the building, but to no avail. "Looks like we'll have to go in," I said on a sigh. We found a table, pulled up the laptop, and after some fidgeting around with the computer, figured out how to log on. As usual, I was making it harder than necessary. I Googled Ohio Turnpike, discovered that they were still reporting a delay where we noticed the parking lot of cars. Floyd Google Mapped the location, and we noticed a road running parallel to the Turnpike.

"I think we can take this route, maybe put Tom Tom on just to be safe, and then by-pass this mess. They might be finished by then. I mean, the construction crew might be done by 3pm, I don't know..."

"Yeah," I said, "But they'd still have to pack up, and I bet there will still be backlash from the cars. I mean, it was backed up for miles," I said.

Having decided on a course of action, we piled back into the van, and headed back towards home. Success was ours that day, as we detoured ourselves through sleepy back Ohio roads, past farms and small towns, congratulating ourselves on our cleverness. We pulled back up onto the highway, and gradually made our way back to the border of Ohio and Pennsylvania. We passed a farm, and entertained ourselves with thoughts of sheep rustling, and how we'd explain to others why we had a couple of animals baaing and bleating strapped to our roof.

"They're uh, dogs. Big fluffy dogs. Big fluffy poodles. We trained them to make that noise. Much less annoying than barking," we said, imagining. Maybe it was the fatigue, but we thought ourselves comedians with this routine, and continued the dialogue as the gap between there and here closed in on itself. 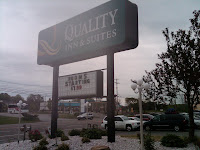 ed at our evening destination, a little hole in the wall motel where we planned to get a little rest before completing the trip back home. It lie just over the boundary that marks one state from the next. Its less than stellar accommodations were just another part of the adventure, I reminded myself, and the price is right. Bonus points for the lovely restaurant next door. Floyd and I both ordered the Friday night special, the "Black and Blue," a blackened spice rubbed filet with blue cheese crumble. Mmm.

We meandered back to our room, and settled in for the evening. I checked e-mail, read Facebook, surfed the 'net, and then settled in with my kindle book on my iPod before drifting off into dreamland. Like a projector abruptly unplugged, the lovely images floating through my mind were cut off by the loud noise of partiers reveling in their drunkenness.

"Hey! Hey Stan! DUDE! LOOK UP HERE!" I heard one person shout. The laughter and giggling, squealing and shrieking continued for about another hour or so. They just need to get a little more roasted and pass out, I thought to myself. When that happened, I knew I could slip back into blissful slumber. At least I hoped.

Next week. The Loomatics, Chapter 5. "Final Destination."
Posted by some things looming at 2:33 PM