Driving to distant locations has become a bit of a habit of mine. The first loom was rather local, Quakertown. The next time, Floyd, my sister, Sara, and I drove to New York for another loom. Now, we were making plans to drive to Ohio. Having measured my van, we decided we didn't need to borrow a trailer. I packed a box with snacks, grabbed a couple of water bottles, and two gallons of water. Floyd took the seats out of my van, hooked up a turtle to the roof, and we were ready to go. 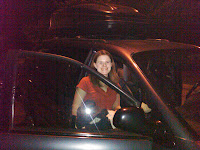 in the morning comes way too early. Equally unfortunate, not a lot in my sleeping little town is open, including the convenience stores. Our adventure began with the hunt for a cup of coffee, decent or otherwise. It really didn't matter. We needed to power up with some caffeine before we embarked on our journey. Thankfully, the search wasn't too long. After trying two different gas stations, we hit paydirt with the third. Pandora loaded up on my phone and plugged into the system, coffee cups in the cup holders, we hit the road.

The trip was rather uneventful. We drove while the sun peaked over the horizon, watched as it rose to full height, while trees, and towns slid past from mile to mile. Stopping for bathroom breaks only, we consumed breakfast and lunch on the road, chatted about everything and nothing, and counted down the hours til our destination.We did make one important discovery, however. There is a sore lack of service plazas between the end of the Pennsylvania Turnpike, and the start of the Ohio one. Our bladders near bursting, and the van beeping and begging for gas, the mile markers on the side of the road gained significance with each one we passed. While the lack of gas stations and bathrooms alarmed us, it wasn't enough of a deterrent from a photo opportunity. 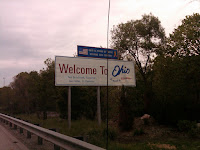 Like pilgrims reaching their Mecca, we rejoiced when we pulled into the first Service station knowing the crisis was averted. It was with great relief we emptied our system of liquid buildup, and filled up on gas. Tanking ourselves with drinks and snacks, we pulled back out onto the highway, cruising to the sweet sounds of Motown floating through the van's stereo speakers. While driving the turnpike, we noticed the other side had been magically transformed from highway to parking lot.

"Oh boy," Floyd said. "We're going to have to see if we can find another route. I really don't want to be sitting in that when we head back."
"Yeah," I said in agreement.

Stay tuned for next week's installment: Loomatics, Chapter 3 "Two crazy people, Two Looms, One Mini-Van."
Posted by some things looming at 10:05 AM