My Foray Into Felt 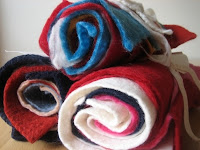 I tip my hat to those fiber artists who use felt as their medium.  My limited experience with felting was enough to tell me I would not ever be one if I could help it. A felt artist, I mean.  It also gave me a huge appreciation for those who work with animal fiber, manipulating it until it becomes matted and formed into cloth.  I just don't have the patience.  Or apparently, the fortitude.

It was most likely my Fibers II course at the University of the Arts when felt and I were introduced.We were given some raw wool, which meant we had to start from the very beginning. No luxury designer, pre-dyed roving for us. Oh no, that'd be too simple.  Step one, I learned to my dismay, was to remove the dung tags from the wool (of course, I didn't know that's what they were called at the time).

There was no advantage of using a washing machine and some netted lingerie bags to wash the wool either.  I was instructed to set out several buckets with hot soapy water. The wool soaked in one bucket, then was transferred to the next and then next and the next, allowing the wool to soak for a bit in each bucket.  The dirty water was emptied and refilled and the process continued until the dirt (among other things) was gone.  Twenty years later, I can't remember how long it took, but I can honestly say, I've since learned many better and less labor intensive ways to wash wool, now that I'm a spinner. 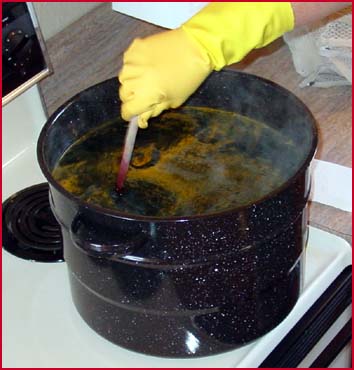 After which, I decided I wanted colors in my felt piece. So I dyed the wool in a very basic rainbow of hues, since my mastery of colors and dyes were rather limited at that stage of my artistic career and learning.  After transforming the plain into bright electric colors, the wool was picked and then carded into batts.  And finally, I was ready to begin felting.

I believe there are various ways to create felt, and some that I'm not even aware of, but my instructor had us use netting to hold the batts in place. I laid the batts down on my army/navy store purchased mosquito netting, layering them perpendicular to each other.  I cut out shapes from the colored batts, and laid them on top.  Sticking some cord in amongst the layers, I thought I would make some textured ridges in my felt.  I was wrong.

I sewed loose X's throughout the length and width of the piece to keep everything in place. It seemed the process would be fairly labor intensive, all that rolling and agitating that I was told felting involved.  Thinking I was going to be using copious amounts of hot water, soap, and agitation, I decided my apartment bathtub was the best place to conduct felt making, and made the dimensions of my piece accordingly.  Rolling and unrolling, squishing, soaping, and yes, even stomping on my wool, I attempted to pound those batts into submissio...er, felt.  After about ten minutes, I was weary.  After twenty, I was exhausted and annoyed.  And after an hour, I gave up.

I probably could have gone back to it the next day. I might have, I can't recall.  And I'm sure I received a less than stellar grade for it.  To this day, I'm not sure what I was thinking when I laid it all out, if I was thinking beyond my typical 20 year old attitude of  "just get this done, and get it over with." The colors were unspectacular. The design was a fail. And the wool was just barely felted.  There's more than a good chance I went about felt making the hard way, as I almost always do everything the hard way.  But then again, I wouldn't have gotten this absolutely fabu pic of me standing in my bathtub, now would I?

Posted by some things looming at 11:11 AM