To Cut or Not To Cut...That is the Question.

Before I became a weaver, I dabbled with the idea of becoming a textile designer. At least, on a more home-made front, I contemplated designing hand-dyed fabrics for others to purchase for their own use and pleasure.  I spent hours printing, stamping, and hand-painting yardage, only to realize the fabric became too precious to me. I could not, would not cut into it.  At this point, I was still practicing the technique. I was no where near good enough to sell hand-stamped cloth, so I figured it might be best if I found a new area of study within Fiber Arts, which led me to weaving.


On the rare occassion I could overcome the need to save every two to four yard swath of hand-dyed fabric, I cut it up and re-sewed them into a liner for a bag, or maybe a custom shower curtain. So it was no surprise to me that I resisted with all of my being cutting into my screen printed cloth.  Naturally, I chose the fabric I liked the least, and paired it with a panel that was always meant to be cut out. It felt better that way.  And of course, this meant I now had a major challenge. How to make these two elements work together, since I pulled them out of my stash, not because I thought "YES! THIS WILL BE AWESOME!" but because I went "WHEW! If I screw this up, my heart won't hurt."

I am a moderate planner, as far as my working style goes. I usually plot and plan things to a certain point, and then I allow serendipity to take a part in the creation of one of my pieces.  In other words, I allow unplanned things to happen and even change my direction totally in a piece, even if I'm half way through making something.   In the beginning of screen printing week, I had no plan other than "what happens if..."  By the middle of the week, I began drawing some mild inspiration from my doodles. I doodle eyes in the margins of my papers all the time. I doodle cartoonish human outlines.  For some strange reason, I thought it was a good idea to combine the two.

Meanwhile, we were supposed to be practicing pulling stamps into our screen (I used an eye) and freezer paper stencils (I made a human form).  When we arrived at the quilting portion of the course, I stood and studied this panel which was a bizarre combination of eyes and marionette-like figure, and wondered, what on earth am I going to do with this? Then it occurred to me. This is inspired by doodling. We're supposed to use the stitching as we would a drawn line. Hmm. What if I doodled over top of the man? 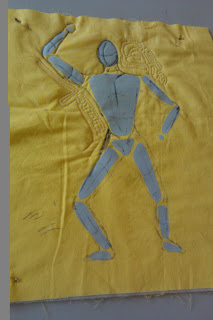 I took some heat and bond, and ironed it onto the back of a piece of light blue fabric.  I then cut out the same stencil shapes of the figure on the screen printed panel.  Finally I ironed those onto a piece of yellow fabric, and proceeded to draw lines using a sharpie marker.  This was my test.  Placing batting and a backing under the mock-quilt-top, I began to experiment. I tested my free-motion foot. I experimented with the regular presser foot to make lines. And then I decided how I was going to create my 'sketch.'  After a bit, I was rather pleased with the results, so I figured it was safe to begin plotting out my quilt.

I decided the panel would be attached to the background as an applique. But how would I make it look integrated?  Once I pinned the panel to the background, and pinned that to the wall. I stepped back. Interesting. The panel almost disappears because there's too much going on in the background fabric. So I decided to see what it would look like with a small strip of color edging one side of the panel.  All I had on hand at the moment was a little bit of pink.  Crazy enough, the pink actually worked! So I kept it.  I love it when stuff like that happens.


Attaching the applique to the background with basting stitches, I then added my batting and backing.  Where to start? The center of course.  I noticed the background had subtle oval shapes hidden amongst all the chaos.  I decided I'd turn these into more eyes.  The rest of the stitching would just happen as I went along, changing colored threads on a whim.   I chose a purple thread to do my 'sketching' of the figure.  However, it wasn't turning out as I thought it should. 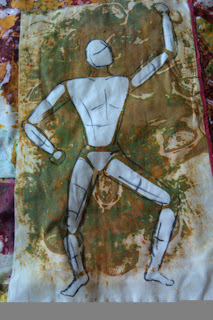 "Well, you know, a sketched line has thick parts and thin parts depending on how you hold a pen or pencil and what angle the tip is at when you make that line," Barbara said to me, as I was mulling over how to fix it.
"You know, I think that's exactly what I'm missing," I said.  I sat down and began going over some of my lines until I had thick areas tapering into thin areas. The more I worked, the more I liked what I was seeing. However, it was costing me a lot of precious time.  True to myself, I chose to be over-ambitious with my project.

So as usual, I spent extra time in the studio, trying to get as much finished as I could.  Unfortunately, I didn't complete my quilt by the end of the week. But that's O.K.  Now I have something to work on at home in the evenings, much to my delight.  My sewing machine fits in a corner of my kitchen, so it's not as if it's in the way or anything. Well, the husband might disagree with that statement, but I told him at least it's not a floor loom or a spinning wheel. He just mumbled something and shook his head as he walked away from the pile I made in front of the corner hutch.    Besides, I have to finish it so I can be sure to post a picture of the completed quilt when I'm done, regardless of how it turns out. :)  After all, what's one more pile of fiber arts supplies? Right?

~melanie
Posted by some things looming at 7:00 AM