During the eight weeks of 'simply irRESISTible' we'll focus on individual artists here on our blog. Every week, three artists will be featured. Today, we're pleased to introduce to you: Lee Harper Schultz from Lansdowne, PA. 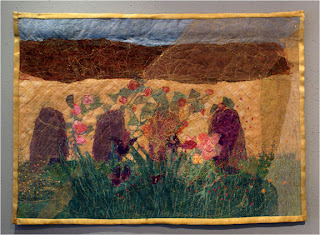 About the piece: The work titled Cloister Rose includes some use of resist done in the early color foundation of this work where folding, stamping, tie dying and other ways of limiting the coloration were used. The work was then used as a base for my stitching techniques where many layers of cloth, machine and hand stitching overlap in a partial woven, layering manner. Cloister Rose started years ago with a cloth cut to make a tactile picture of the cloister of the garden in front of my Art room at Overbrook. This last spring I was cleaning the room and was moved by the sudden death of a colleague to finish the piece thinking of her. The roses in the cloister were particularly beautiful this past May and June. 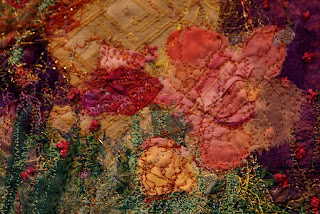 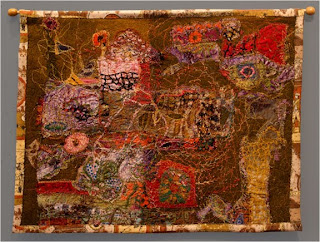 Home Again
About the Piece: Recently I found an older sampler from a Stitchery class that I had in college in 1970. It had been sitting in my parent’s home for many years partly folded in my mother’s sewing room where I had originally made the piece using hand and machine embroidery. This old work has been reinvented with additional machine stitches and for the Simply Irresistible show I have added handspun silk threads that were tie dyed to complete this project. Much of the cloth has the patina of tie die and differences in the effect of light can be seen on some of the pieces of cloth as they have survived in time. In this case some of the resist is that the material was folded and light over time has affected the color of the cloth. Now that it has been cut apart and reassembled, I added machine and handspun tie dyed threads to complete the work. Because of the influence from an earlier time when I was living in my parent’s home, it is named “Home Again”. I consider TIME to be one of the RESISTS affecting this cloth. 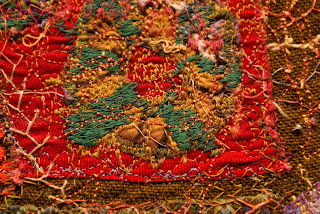 Home Again, detail
Posted by some things looming at 8:00 AM