Nothing I love more than a good challenge, especially where looms are concerned. I love returning a loom to operational status, taking it from unused to working again. Recently, I've been challenged to help get the barn frame loom  at the Daniel Boone Homestead functioning again.  I know very little about these great old ladies we call "barn looms" but in my recent research to glean more information, I am starting to learn some valuable pieces of information. For one, these looms are more appropriately called "barn frame looms" because of their construction, not because of the wood coming from a barn (as I had been told) or because they were used in a barn (as I have heard people say...brrr. Can't imagine weaving in a barn!).

Daniel Boone Homestead's barn frame loom has been sitting unused for almost five years, at their best guess.  It was in decent condition, but dirty.  There was a warp on it, but it was old, filthy and stretched out, so we began our day cutting off the old warp... 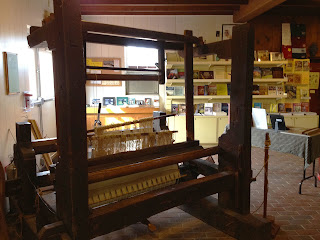 ...which made the ol' girl just a little bit unhappy. I reassured her she'd be feeling much better once she was clean and re-dressed.  From there we vacuumed up the big chunks of dirt and grime, followed by swiffer floor clothes and swiffer dusters to get into all the nooks and crannies.

Lastly? We filled a bucket with water and oil soap that is designed specifically for cleaning wood. We used barely damp sponges, carefully avoiding any metal parts, to remove any remaining grime.  We all stopped sneezing by this point, stepped back to admire her glory, then congratulated ourselves for a job well-done. The final result was a loom that looked so much better, and so much prettier.

That was only the beginning of our day.  We still had to re-dress this beauty, so we used a warp that had been hanging off the loom for display.  Diane, a fellow spinner who had enlisted my help for this project, had taken the older warp home and cleaned it for this purpose. We were a bit challenged with a mystery warp,  but not for long.  After taking a few minutes to count the number of ends in the warp, we had a better idea of what we had to do next.

In hindsight, if I had known what we were facing when we set out yesterday morning, I would have brought some boards to clamp to the frame, attaching the raddle down to the board.  We took one look at the back of the loom, scratched our heads and said, "Huh, there's only a warp beam, no back beam. Hmmm..." We got creative with some carpet warp and figure out a away to suspend both the lease sticks and the raddle.  It worked, even if it was a bit awkward at times.  After we had the warp beamed, we set out to thread the string heddles. 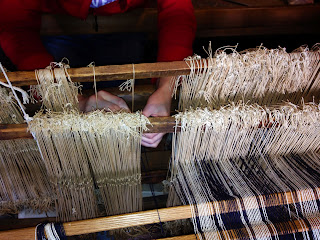 And of course, after threading heddles, we brought the warp through the reed.

Sadly, I was foolish and didn't take any pictures after the warp was tied on.  I became too wrapped up in problem solving, and forgot to pick up two children from after-school activities.  Oops.  Clearly photography was even lower on my list of priorities.

Whenever I am dealing with a loom that hasn't been used in awhile, I find I need to put on a test warp to check all its moving parts. I can do a visual examination and get a good idea of what to fix, or what to adjust, but it's not the same as sitting down and trying to weave. When things don't go smoothly in the weaving process, I know something is off and then I set to problem solving.  I figured this same method would work well for the barn frame loom.  For me, a loom is a loom is a loom, and the mechanics, more or less, are the same.  Sure, each loom has their own 'personality' and sometimes a weaver has to accommodate for that, especially where older looms are concerned.  However, part of my problem solving process is to determine what is a 'quirk' of that particular loom and what can be helped with some minor adjustments.

Through dressing the loom and weaving a little bit, I've already discovered some things that are possibly not quite right. I will most likely need to do some minor adjustments from re-arranging the string heddles, to testing to see if the batten (hanging beater) is put on incorrectly.  It seems odd that I would have to push the batten back a full 6" while stepping on the treadle to make a shed so I can throw the shuttle. And while this is not my first antique counter-balance loom, this is my first barn frame loom, and I'm going to need to do some more research.  Earlier in our day, we had already discovered one part that had been put on incorrectly: the brace that held the built-in bench was attached vertically on one side, but correctly on the opposite side of the frame.  The bench board is completely missing, so we hope to restore this in the near future.   This discovery alone makes me suspicious about the placement of the batten. I have a feeling I'll be doing more research on barn frame looms here in the near future.

Oh! And by the way, if you see my family passing out fliers with my face on it and the words, "Missing, Reward Offered," you'll know where to find me.  I'm at the Daniel Boone Homestead getting to know a new "old" friend.
Posted by some things looming at 11:53 AM