Picking Up A Package 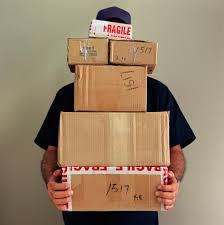 We get a lot of packages either through UPS or USPS here at 'some things looming.'  I wasn't here much last week due to being under-the-weather, so it was no surprise when I found a pink package slip in the mail slot this morning dated last Wednesday.

But no. That would be logical, and why would I succumb to logic?  I saw the date the package arrived was last Wednesday which meant this poor package had been sitting in holding for nearly a week!  So I grabbed my son's bright blue umbrella, (which I had stolen this morning) and toddled down to the post-office.

To my amazement, there was no line!  There's always a line! I was able to approach the window immediately.  The clerk took my pink slip, wandered to the back and I waited. I waited and waited and waited and waited and waited.  As an ominous feeling settled over me, the circumstances I found myself in began to sink it. It's raining. I have to carry a package of unknown size, undetermined weight half a block up hill. What if the reason it's taking so long is because this package is...big???

The clerk rounded the corner with a box that took up half my body size. It wasn't very deep, about four inches, but it was definitely four feet wide by four feet tall. How would I hold my umbrella, and this package?  Too late now, I supposed. I was committed. I had to carry the box back to the gallery, as quickly as possible.  I guess I'm getting wet today. I mean, it's just rain. Not like I'll melt, right?

Tucking my bright blue umbrella under my arm pit, I grabbed the package through the window and before I let the clerk release her grip I asked, "Is it heavy?" She shook her head no.  She lied.  It wasn't heavy by any means, but it wasn't feather-weight either.  It was just weighty enough to add to the awkwardness of hauling such a box on foot on a sunny day.  And today, might I repeat myself, was as far from sunny a day one can get.

I walked out of the post-office, turned the corner and began making my way up Washington street.  Facing the wind, the rain was pelting my face in an unpleasant manner, and the cars were splashing water up from the road onto the side walk. After about two minutes of this misery, desperate, I figured, why not? let's see if we can carry the umbrella and the package.  At this point, I probably don't have to tell anyone this was a wrong decision, by any means.   Wind, Rain, holding a bulky package, dodging puddles and car-splash, this is a recipe for disaster. 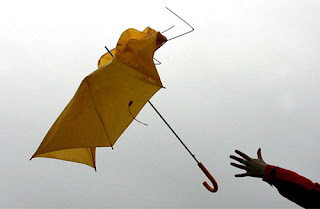 The minute I hit the button to unfurl the umbrella, the wind blew and turned it inside out.  Tugging and pulling this way and that, the umbrella threatened to pull from my hands or whack a human being who happened to be outside braving the weather upside the head with its erratic back and forth movement.  I could barely control the umbrella, while keeping the package from falling out of my other hand.

I must have been a sight. There weren't too many people on the street, but there I was, bright orange purse, bright red scarf waving like a flag, bright blue inside out umbrella flying around wildly, holding onto a package 3/4th the size of my body that was constantly attempting escape, and my hair whipping around my face making it nearly impossible to see... Well.  It was no wonder that I was attracting attention from people in their cars stopped at the intersection, and the few brave souls on the sidewalks watching the comedy routine that had just become my life in that moment.

I will not drop the package. I will not drop the package. I will not drop the package. As I fought my way up Washington Street, I repeated that mantra multiple times, using my knee to adjust my grip, hoping I wouldn't lose the umbrella, that was, frankly, at this point totally useless. I stepped in several deep puddles along my trek, soaking my shoes and socks thoroughly.  Longest half a block of my life.  But I made it.  Finding myself in the shelter of our gallery stoop. I lowered the package, fiddled with the umbrella so I could close it, let myself in, dumped my purse and umbrella so I could wrestle the box through the door.  Taking in my appearance in the reflection of the door, I realized that doing my hair today this morning had been a pointless exercise, unless one is going for the 'drowned rat' look.

The package is in perfect condition, by the way, even if I am not.
Posted by some things looming at 11:10 AM