It was a hot, humid, yet glorious Tuesday, when Floyd, my son Joshua, and I went on the road with a trailer hitched to Floyd's truck. Stopping in Philadelphia to pick up Kathryn, we began our most recent loom collecting adventure. Sadly, the world is now bereft of Doris Boyd, a wonderful fiber artist, wife, mother, teacher, and long-time weaver. Her basement held all of her looms, equipment, and yarn, where, I imagine, all of the activity took place. The family, hoping to clear out the studio, had held a sale of her looms back in April. This day, they were giving away the rest, hoping looms would go to good homes. A member of the New Jersey Handweavers Guild had contacted Kathryn to donate a loom to the homeless project: a 24" Devereux loom. In turn, Kathryn informed us that there were other looms, wondered if we'd be interested. Interested? Did she really just ask me if I was interested. Ahem….

"Hi, I'm Melanie, and I'm a loom-aholic."
I never turn down the opportunity to acquire another loom (especially if the only cost is in mileage/gas/acquisition and repairs). And really, what’s a road trip without pulling Floyd, my appointed 'loomatic,' into the mix? Sooooo, Floyd and I put our heads together, figured out from whom we could borrow a trailer (Thanks Eric!) and made last-minute plans for a trip to Tabernacle, NJ. Since we set out so early, we decided to stop for breakfast close to our destination. After all, "loomaticing"(I just made that word up. No really, I did.) requires great quantities of ones reserve energies. 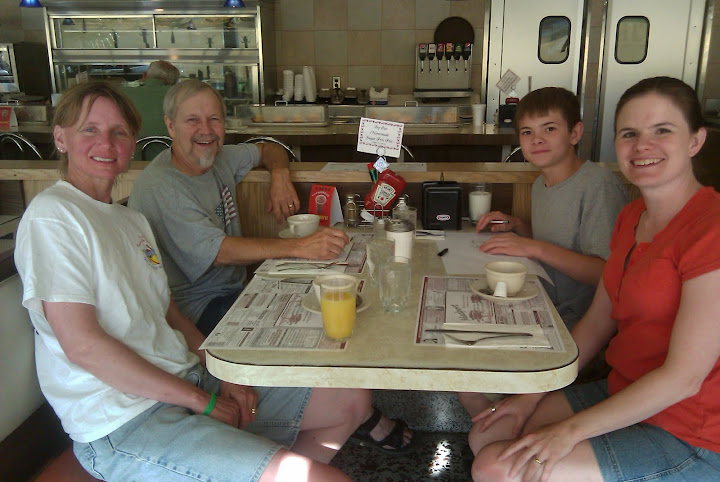 Around the table starting on the left: Kathryn, Floyd, Joshua, Melanie
After several cups of coffee, a couple of omelets, creamed chip beef, and a short stack of pancakes, our tummies were tanked up, and we were ready to go out into the world of loom foraging. We arrived at the Boyd home a few minutes early of their opening, but it wasn't long before more eager loom-atics showed up. Several looms were already put aside for others, however with great foraging prowess, we were able to acquire two Lane counter-balance looms: small and medium sized.

It took some creative disassembling on our part to carry the Lane looms out the door (good thing we had tanked up in advance). The Devereux was compact enough to keep in one piece. It took even more creativity to pack it all up into the back of Floyd's truck and the trailer, but we managed.

Arriving back in Philadelphia, we hit a snag when we tried to take the Devereux through Kathryn’s front door. Oooops…well this is why we always bring Floyd along. Ok. Turning the loom this way and that, and still there was just no way it would fit. Frustrating. We only needed a stingy little half of an inch, and the loom would have made it. We looked at whether or not we could get the screen door off. Maybe that would gain us more clearance. No? How about putting it through the window? Oh, fun. None of us relished that thought. OK…let’s take it apart. Floyd? Oh, my. Well that’s interesting. The Devereux seemed to have (aside from the beater) no nuts and bolts with which to take it apart! Hmmmm. We looked it over. We lifted and looked under. We bent down low and looked sideways. Humpf! “Well how about that!” We collected sighed. Who would have thought? A fine work of craftsmanship, in and of itself, the loom was constructed aesthetically so that the joins were practically seamless. 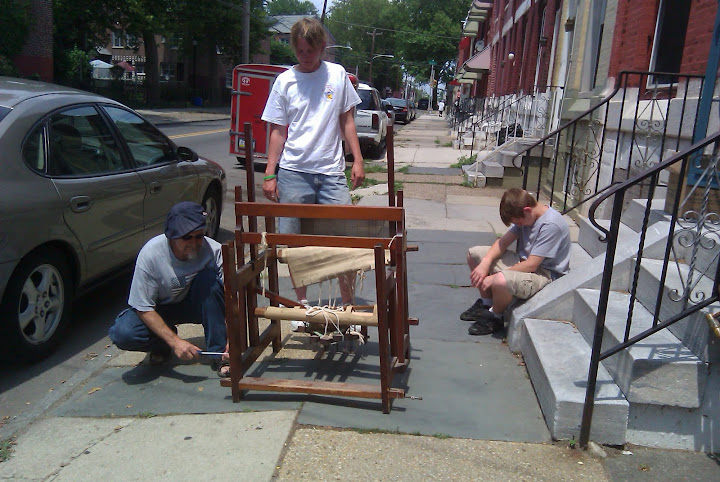 (Floyd taking off the beater...which actually did have bolts)
Not to be out-crafted, eventually, I noticed four wedges down at the bottom of the loom. The foot rest, and back support bar fit through slots on the frame sides, and then the wedges were positioned into slots, as if holding the bars onto the frame.

"Hey look at this!" I said "I wonder what would happen if we took those out." Floyd got out his tools, gently easing the wedges out of their slots. Amazingly enough, the entire loom is held together by those four wedges. A rather ingenious design, if I do say so myself.
Piece by piece, we got the Devereux into Kathryn's house, and into the front room. 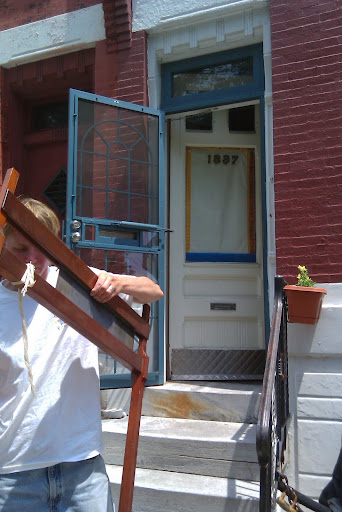 "Do you think you can get that back together before you go?" Kathryn asked.
"Sure, No problem!" I said.
I began to reassemble the loom, and got a slight bit stymied when it came to putting the shafts back on. As sweat beaded on my brow, and my loom repair prowess was tested, not to mention my pride, I fiddled until I got it figured it out. I had never seen a counter balance loom quite like the Devereux, its pulley system quite different than what I'm familiar with. Not to mention, I've only touched a handful of counter-balance looms. Taking what I knew about the loom, how it should work, I managed to work out the solution. Now here's hoping when Kathryn warps it for the first time, it's correct. I could foresee a trip back to Philadelphia in the near future, if it's not. 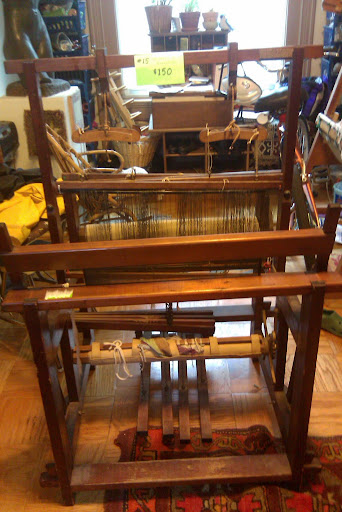 Being pressed for time, we said our goodbyes, and piled back into the truck. We wandered around the maze of streets for a bit, as Kathryn's neighborhood was a little unfamiliar. The GPS wanted to take us around the block endlessly, but thankfully, Floyd has a good sense of direction. We still managed to beat the beginnings of Philadelphia rush-hour traffic.


Arriving back in Reading, we pulled up to the curb, put our flashers on, threw the cone out onto Washington street, and quickly unloaded the trailer. We were nearly completed when an officer pulled up behind us and asked if we had a permit.
"A what?" we asked
"A permit for loading and unloading on a thoroughfare. You need one for Washington Street."
"Oh we're sorry. We didn't know. We've been unloading stuff before and never had a problem. No one ever told us different," we said.
"Just make sure next time you have a permit," the cop said as he pulled away.

Stashing the looms quickly into the building, we head off for some quiet and some vacation time, the looms waiting for our return. Don’t tell Floyd, but I don’t think the one loom’s going to fit through the Loom Room door. It’ll be a surprise.

It's always an adventure when the loomatics go for a ride.
Posted by some things looming at 10:55 AM